It’s a pretty scary thing to receive a legal letter from the law firm of a large corporate, especially when they claim that you’re in breach of their rights and then make a series of demands. Going to court is very expensive and even if you’re in the right, do you have enough money to be a test case? If you lose you might end up not only having to pay your own costs but those of the company who sued you. The threat of legal action is pretty intimidating for most people.

Sky TV is currently sending such letters to a number of people (see an example here). These are their own paying customers, who just want to watch Sky TV on their home-made entertainment systems. So why is Sky doing it? Before we can answer that question we’ll have to explain a little bit about electronic program guides.

When you subscribe to Sky TV you get a set-top box that takes the Sky signal, decrypts it and sends it to your TV. The signal also includes the schedule of what’s on and when, the Electronic Program Guide (EPG). Products like the MySky digital video recorder rely on the EPG to, for example, record every episode of Top Gear no matter when it is on.

Some people prefer to use their own equipment to watch and record TV. They also need the schedule information from the EPG but the TV companies don’t publish the data in a convenient format. Therefore the hobbyists started to create their own EPG, developing tools to take the data from websites and then sharing the results with the rest of the hobbyist community.

It’s important to note that the EPG doesn’t allow people to watch Sky TV without paying for it. The EPG just says what’s on. You still need to have a Sky set top box and a Sky subscription.

The broadcasters not only don’t make the EPG data easily available, they also claim a copyright over the listing data. As TV3 puts it:

3’s listings are copyrighted and CANNOT be used without permission. We can supply you with our listings for a fee of $2,000 per month.

When asked why Sky is sending these cease and desist letters to people, the response from Tony O’Brien, Sky’s Director of Communications was simply “Because they are not authorised to use Sky’s listings information.”

But can you copyright a listing? Isn’t it just a fact that channel x is showing program y at time z? New Zealand law makes it clear that you can’t copyright facts but that you can copyright collections of facts. The collection is seen to have a creative value worthy of copyright protection.

This distinction was at the heart of a recent court case in Australia where Nine Network sued IceTV (this section is based on an informative article from Guy Burgess). IceTV were creating their own program guide from a range of sources including the Nine Network schedule, so Nine Network sued them for breach of copyright.

While IceTV conceded that Nine owned the copyright in their listing, they said they were only using some of the information from Nine’s schedule. The judge agreed with this intrpretation, saying that as a work became less and less original (e.g. a recitation of facts such as a TV listing) that the proportion of the work that had to be taken to count as substantial copying increases, and ruled against Nine Networks.

Sky TV obviously thinks that their listings are copyrighted and that people must first obtain their permission before using them. Therefore it seems that they object to people making Sky listing data available for others to use in their home entertainment systems.

Sky have paid Phillip Wood, a partner at law firm Buddle Findlay, to write letters asking these people to remove material that Sky objects to. We know of takedown notices sent to:

The letters say that Sky believes that the recipients are in breach of a number of New Zealand laws and gave the following explanations (quotes from Tony O’Brien, Director of Communications, Sky TV):

The letters then ask the recipient to stop what they’re doing and delete any content that Sky thinks infringes their rights.

The letters finish with the ominous, “We suggest you seek independent legal advice immediately.”

One of these letters was sent to the author of the DJKXML application (see the whole conversation here). This application connects to the TelstraClear website, downloads the program listing data and then reformats it into an electronic program guide (EPG). The user of the application can then load the EPG into their entertainment system so that they can see what’s on and when. 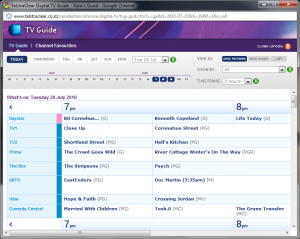 The author of DJKXML is a hobbyist who wrote it for his own use. He then made it available for free to anyone else who was interested.

This case is interesting, because the DJKXML application doesn’t actually contain any data at all – it just helps people download it from somewhere else where the information is easily available. How can this be in breach of the Copyright Act?

It might fall foul of section 37 of the Copyright Act 1994 that forbids a number of acts involving “an object specifically designed or adapted for making copies of that work, knowing or having reason to believe that the object is to be used to make such infringing copies.”

However, one could note that any web-browser also downloads and then reproduces the data in a different format. The stream of raw HTTP data from the website is rendered and displayed by the web browser so that people can see the listings. Does this mean that a web browser is also in breach? What about a screen-reader being used by a blind person that takes that same data and speaks it?

TelstraClear obviously expect that people will want to look at and use the data in different ways – their online TV Guide has three separate views and even includes a Print button to make it easier to print the data.

There’s no doubt that a reasonable person, reading that clause on the TelstraClear website, would believe that they had the right to use the listing information for their own needs.

How can Sky TV be sending takedown notices relating to content that is explicitly made freely available on the TelstraClear website?

Resolving issues in the courts

You’d think that with such a clear statement from TelstraClear that the data is available from their site for non-commercial purposes, that there’d be no case to answer. Unfortunately our legal system is not that easy.

There is already one current case in the New Zealand courts about the copyright of directories. Yellow (publisher of the Yellow Pages) is suing both Yellobook.com.au and Image Marketing Group in the High Court for taking data from the Yellow Pages. The cases have gone on for a while and has involved a number of very expensive lawyers.

How credible is it for a single hobbyist developer to go to court? We asked the developer of DJKXML what he thought:

No I cannot afford to fight them in court. I am a family man earning a single wage for my entire family to live on. I would like to fight them but due to the fact that I don’t make any money from this application, fighting them does not serve any purposes.

The developer has backed down and withdrawn the application even though he feels that he’s in the right. He can’t afford to fight them in court:

If I win, it costs me, if I lose it costs me. All in all, it’s a lose-lose situation for me.

Sky have apparently sent “several” letters and we’ve listed at least four of them. When asked how many had gone to court, Sky responded that all of the recipients had “taken the correct course of action” and stopped doing what they were doing. But did they do this because they recognised that Sky was right or, as with DJKXML, because there was no way they could afford to take on Sky’s lawyers?

The net result of these scary letters is that some of Sky’s paying customers, the hobbyists who like to use their own equipment to watch TV, have lost access to a suitable electronic program guide.

What does Sky get out of it? No one is using the data commercially and Sky refuses to even offer a service that people could subscribe to. All they’re doing is inconveniencing some of their own customers.

A way forward for the hobbyists?

When we asked Sky TV about the similarities between their sending of takedown letters and the Ice TV case in Australia, Sky responded that it wasn’t relevant as “That case involved a situation where IceTV was independently generating their own listings”. This implies that Sky TV would have no objection if people created their own EPGs as long as they weren’t substantially copying it from Sky’s.

However, we know that Sky TV is already sending takedown letters to people who take data, with permission, from TelstraClear’s website. Creating your own listings may be legal under New Zealand copyright law but that doesn’t mean you’ll be safe from Sky’s lawyers.

Firstly, we don’t understand how Sky can send out takedown notices when people are using data from someone elses website in accordance with the published terms and conditions on that site. If Sky TV have a problem with TelstraClear making the listings available in so many formats and under such a permissive license, shouldn’t they be taking this up with them?

Secondly, we don’t see what Sky gains from sending out intimidating letters in an attempt to stop people using this data. We believe that people who are paying for a service like Sky’s, that includes an EPG, should be allowed to access that EPG data in a way that is most useful for them.

Thirdly, we think that this demonstrates a serious weakness in our legal system. If a large company accuses you of something and implies they might take legal action, there’s no way that the average person can afford to go to court. Their only option is to agree to the demands, regardless of the merits of the accusation. This is obviously not a fair process.

Sky Television were asked if they wished to respond to this article and have declined to comment further.