We’ve long opposed the USA’s attempts to rewrite our copyright and other intellectual property laws through trade deals. Amongst other activities:

We’re now pleased to endorse the goals of the Fair Deal campaign:

The Fair Deal campaign is about keeping the Trans Pacific Partnership from changing our copyright laws.
A Fair Deal is one that opens up new trade opportunities without forcing us to make copyright law changes that would take a major toll on New Zealand.

You can read more about the TPP and the Fair Deal campaign at the website, and we recommend that you look at What You Can Do – and do something to stop the TPP.

While ACTA gets all the attention in Europe, the governments involved in negotiating the Trans Pacific Partnership trade agreement are still charging ahead. There have been 10 major negotiating rounds as well as many inter-session meetings, with the countries involved aiming to get it finished before the end of 2012.

You can read more about the TPP treaty, or why we think it’s flawed, but this update is based on what we’ve been reading and a briefing from NZ officials today.

Firstly, the negotiators now have a consolidated draft text that they are working through slowly. Apparently the intellectual property (IP) sections are the most contentious with a lot of major differences still to be resolved.

Secondly, the main IP alternatives are the US proposal (leaked here and similar to other recent trade deals signed by the US) that would see copyright laws become more restrictive, more punitive and less just, versus the NZ/Chile ideas (leaked draft papers) which are largely based on TRIPS and allow for more flexibility between countries and even include some protection for consumers rather than just large media companies.

Thirdly, the US proposed IP chapter goes even further than what they originally proposed for ACTA (which was substantially watered down during the negotiating process). It includes internet account termination, statutory or triple damages in civil suits, an extension of what would count as criminal copyright infringement, allowing copyright holders to ban parallel importing, and criminal penalties for circumventing copy protection measures even if you weren’t breaching copyright. As is typical with these types of proposals, respect for the right to due process and a fair trial are sadly lacking.

Finally, the whole process is still very secretive with little information getting out. There is not intention to release any draft texts, and the countries involved have even agreed not to release details of negotiations until four years after the treaty is signed.

What you can do

There’s still a long way to go in the TPP negotiating process and there’s still room to demand a better treaty and a more open process. Write to your MP and make sure they’re aware of what’s happening and that you’re not happy about it

Considering joining TPP Watch if you’re opposed to the whole treaty, or on the IP front NZ Rise is doing good work on sticking up for our local IT industry while Creative Freedom Foundation NZ is defending the interests of local artists.

You can keep up with TPP news with the TPP Digest or by following Michael Geist, Knowledge Ecology International and Public Knowledge.

The TPP Forum held in Wellington a week ago was a great success with over 130 people turning up to find out more about the Trans Pacific Partnership free trade agreement and what it means for New Zealand.

Jane Kelsey put the TPP in an international and historical context and talked about the impact it would have on New Zealanders.

Thomas Beagle from Tech Liberty gave a presentation on how the TPP was an attempt to circumvent New Zealand’s democracy in the formation of law around intellectual property.

Des O’Day, lecturer in health economics from Otago University, gave some background on Pharmac, how it worked to save New Zealand money, and how it would be at risk from the TPP. Due to technical difficulties Des’s presentation was not videoed. 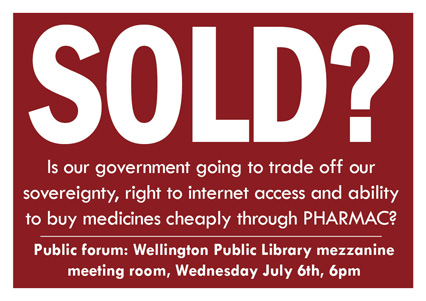 Call for submissions on regulations for new copyright law

The Copyright (Infringing File Sharing) Bill has been passed and now the Ministry of Economic Development has to develop the detailed regulations that will define the processes described within the Bill. They have asked for submissions and have released a discussion document (link currently not working due to failure on MED site).

The main topics are:

The following points are of note:

We’ll be doing a submission aimed at making this inherently flawed law work as fairly as possible.

Wikileaked US cables about s92A and TPP

Idiot Savant at No Right Turn has been keeping an eye on the flood of documents coming from Wikileaks and brought our attention to two of them:

From April 2009, this cable (09WELLINGTON88) is a general backgrounder on the events around the rise and fall of section 92A of the Copyright Act. The US bias towards the rights owners is clear and the cable makes it clear that the US government would be pressuring the NZ government to hurry in the redrafting of the law – and even offers to help. The following quote will worry anyone who has been following IP issues in the US:

U.S. agencies have the benefit of 10 years worth of experience in enforcing the U.S. Digital Millennium Copyright Act that may serve useful to New Zealand officials in their effort to implement section 92A.

From February 2010, this cable about TPP (10WELLINGTON65) is amusing because the MFAT officials are telling the US that the perception in New Zealand that a free trade agreement with the US will lead to be a big increase in trade is over-hyped. The officials also admit that intellectual property (copyright, trademarks, patents) and pharmaceuticals will be contentious issues in NZ.

Guest post with commentary on the first day at the Trans Pacific Partnership negotiations in Auckland.

What I learned today in school The Trans Pacific Partnership Auckland Round IV Stakeholders briefing:

END_OF_DOCUMENT_TOKEN_TO_BE_REPLACED

Guest post with commentary on the first day at the Trans Pacific Partnership negotiations in Auckland.

END_OF_DOCUMENT_TOKEN_TO_BE_REPLACED

The fourth round of negotiations for the Trans Pacific Partnership (TPP) starts in Auckland today. Nine countries are meeting to develop a free trade agreement covering a wide range of goods, but it looks as though the copyright maximalists are using it as an excuse to push their extremist position yet again.

The leaked New Zealand position paper clearly indicates that some participants are trying to push a “TRIPS Plus” agenda – an extension of the internationally agreed provisions in the WTO’s TRIPS agreement. This agenda, as seen in the South Korean and Australian free trade agreements with the USA, typically includes “three strikes and you’re out” Internet infringement laws, punitive minimum damages for copyright infringement, and would also limit access to currently available generic medicines.

Thomas Beagle, Tech Liberty, “New Zealand has already dodged the bullet of “guilt upon accusation” when section 92A of the Copyright Act was overturned, and then again when public pressure fixed the intellectual property provisions in the ACTA treaty. It looks as if the TPP is yet another attempt to push laws that sacrifice civil liberties for media and pharmaceutical company profits.”

David Zanetti, Tech Liberty, “We’re disappointed that we’re reduced to finding the NZ government’s position through document leaks. Why can’t these position papers be published for everyone to see? It’s not like they’re secret from the other negotiating countries.”

Tech Liberty believes that the TPP and other similar treaties should be negotiated in public in the same way that UN treaties are. While countries can keep their negotiating bottom lines private, the papers and drafts should be published for others to see. ACTA was originally going to be a secret negotiation but it was leaked – and we ended up with a better treaty as a result. See our full article.

Thomas Beagle, Tech Liberty, “Openness and transparency helped fix the ACTA treaty, we believe that negotiating in the open would improve TPP too. People have a right to be consulted and for that consultation to be meaningful it has to happen before the text is finalised, not afterwards.”

Tech Liberty is dedicated to protecting people’s rights in the areas of the Internet and technology. We make submissions on public policy, help to educate people about their rights, and defend those whose rights are being infringed.

ACTA (the Anti-Counterfeiting Trade Agreement) has shown us that openness when negotiating trade agreements leads to a better result – but it looks like this lesson that hasn’t been learnt by the negotiators of the TPP (Trans Pacific Partnership) free trade agreement.

At the beginning of the year Tech Liberty was involved in the campaign against the ACTA treaty. A major part of the problem with ACTA was that while we knew it was attempting to push more offensive IP laws, the secrecy around the negotiations meant we didn’t know what was in them.

ACTA followed the traditional model of negotiating a trade agreement (PDF), which goes something like this:

You’ll note that the consultation with the people comes after the treaty text has been finalised. The process is structured so that there’s no chance that a government could consult, then come back to the negotiations and ask for more changes to be made (and indeed, this could be a bit chaotic).
END_OF_DOCUMENT_TOKEN_TO_BE_REPLACED

New Zealand is one of the four original members of the Trans-Pacific Partnership free trade agreement. Other countries (Australia, the USA, Peru and Vietnam) are now interested in joining the agreement. It is referred to as both TPP and TPPA.

This FAQ answers some of the frequently asked questions about the TPP. It was last updated on 16th May 2011.